Dear Mr. Electrician:  How do I install Wiremold surface metal raceway on the ceiling to power my electric garage door opener?

Answer:  If there is an existing electrical outlet on the wall of the garage, Wiremold can connect to that and extend power up to the ceiling.

A client was selling his house and needed to have an electrical outlet installed for the garage door opener.  I was able to add Wiremold 500 surface metal raceway to an existing wall switch and outlet to bring power to a new ceiling outlet .

Below are some photos of the Wiremold metal surface raceway installation in his garage.  It was to replace an extra long homemade power cord that was tacked to the garage ceiling and wall for the garage door opener.  NOTE: Text links below go to applicable products on Ebay.com.

Next to the human entrance door at the rear of this garage there was an existing three gang metal switch box in the wall for 2 switches and one electrical outlet.  One of the switches below was a 3-way for the garage light, the other a single pole for an outside light.  The existing outlet was not GFCI protected.

Below is the end result of the same switch and outlet location after installing Wiremold 500 for a ceiling outlet above the garage door opener.  The three gang Wiremold extension box extends less than an inch out beyond the finished wall.

A Wiremold V5751-3 three gang extension box was used to attach onto the existing electrical box.  More photos below.

In the above photo you can see the extra long power cord (Painted same color as ceiling) is tacked across the ceiling to an outlet on the inside front wall of the garage.  That is not an extension cord, but the actual cord wired directly into the garage door opener.

The green arrow points to the hole in the steel that the cord is passing through.  This is not safe because the steel could cut into the insulation on the wire and cause a short circuit or an arcing condition.

It was not a good idea to pass the cord through this steel bracket.  Whoever did this removed the factory installed power cord from the garage door opener and installed their own much longer, homemade power cord.

The user installed cord was stapled to the ceiling and down the wall to an outlet at the front of the garage.  The steel could have cut into the cord and created an electrocution hazard.  The electrical outlet was not GFCI or AFCI protected.

The existing wiring consisted of a three way switch for the garage light, a single pole switch for an outside light, and the electrical outlet that was not GFCI protected.

I surmise that the rusted screws on the side of the outlet above was a result of these devices being mounted inside of an un-insulated outside wall.  There didn’t appear to be any water infiltration.

The three gang extension box base ring is attached to the existing wall box using 6/32 screws.  After installing the base plate it is possible to begin the wiremold installation.  The Wiremold 500 slips onto the short tongue on the base plate.

Note the ground wire pigtail under the green screw.  It is not easy to see, but it is connected to the bunch of ground wires first, then wraps around the green screw and has enough slack left over to connect to the GFCI.

A big blue wire connector was needed to tightly connect all of the ground wires together.

The internal elbow is added to one end of the metal raceway and put into place.  After the elbow is secured using deck screws because of their flat head, a piece of 500 raceway can be inserted at the other end.

The short tongues on the base above are a good solid connection after being inserted into the Wiremold.  The above outlet box base was attached to the ceiling using two toggle bolts.

The Wiremold factory recommends that you cut #500 using a hack saw with 32 teeth per inch.  This will reduce the size of the burrs on the cut pieces.  It is important to get rid of the metal burrs (Indicated by the green arrows above) after cutting Wiremold.  The inside burrs can nick the insulation and the outer burrs can interfere with the Wiremold connecting to a box or fitting.

I use a small round file for the inside.  A flat file for the outside.  I insert a flat screwdriver into the two narrow slots to clean them out. 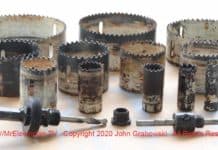 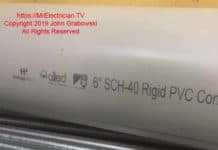