Dear Mr. Electrician:  What is the best way to remove concentric knockouts in an electrical circuit breaker panel without loosening the remaining outer knockout rings?

Answer:  When you remove concentric knockouts you must be careful not to take out more than you want.  NOTE: Some text links below go to applicable products on Amazon.  As an Amazon Associate I earn from qualifying purchases.

If you look closely at the way the concentric knockouts are stamped on the electrical load center you will see that they alternate between being punched in and being punched outwards.

You could start with the smaller center KO first, but I usually go with whatever is easier and most convenient for each job.  I have found that the difficulty with removing concentric knockouts varies according to manufacturer.

Some are too easy to remove and the wrong rings can come out.  Others have been extremely difficult sometimes to the point where it was easier to use a drill and knockout punch rather than make dents on the box.

I use a hammer and an old screwdriver for making the first punch.  Begin the knockout removal by banging it in the direction that it was pre-punched from the factory.

Once you get it started by hitting with the screwdriver you need to twist it or knock it forth and back a few times to loosen it up.  If you have a good pair of diagonal pliers or a pair of BX Cutters you can sometimes get in there and cut one or more of those welds or the ring itself.

Just don’t try to get it real fast.  Be patient and work it out.  You will feel the knockouts get loose as you move them forth and back.

For subsequent knockout rings sometimes you can use your pliers to carefully pry the ring halves until they are up enough to squeeze them together and then move the pliers forth and back parallel to the anchor point until it breaks off.

If you try to rock in the other direction it will tend to twist the next ring up.  Just keep removing the rings in the direction that they were punched and you should be fine.

In a situation where the electrical sub-panel is recessed in a wall, you can use a long thin screwdriver and stick it between the edge of the wall and the edge of the panel to apply a little pressure on one of the rings from the outside to get it started.

Each electrical manufacturer’s concentric knockouts are different in strength and ease of removal.  Sometimes they pop out too easily and you have a much bigger opening then you need.  Fortunately there are reducing washers available in all trade sizes, made to transition from the larger opening down to the size that you need.

If you punch out the wrong knockout, it can be sealed up again using a knockout seal.  Reducing washers and knockout seals can be purchased online or at almost any local electrical supply company.

Fortunately every electrical load center manufacturer also has available blank filler plates to cover up the empty slots in the circuit breaker cover.

The remaining burrs on the knockout holes can be filed down using a half round file.

In the electrical panel above the inner 3/4″ knockout was the easiest to punch out first.

CLICK HERE to see Electrician’s Tools and Gadgets on Amazon

I cut the next ring using my high leverage Knipex Diagonal Pliers.

With the concentric knockout ring cut it is very easy to remove by moving it forth and back a few times.

The last concentric KO ring that I needed to remove was cut with my Knipex Diagonals.

Cutting the concentric KO rings is not always this easy.

All of the unneeded concentric knockout rings have been removed.  An inch and a quarter flexible metal conduit connector will be going into the above knockout.

Another method for removing concentric knockouts that is sometimes used by professional electricians is to drill the welds.  Use a very sharp high speed metal cutting drill bit that is slightly smaller than the knockout weld.  Do not use a unibit or step drill bit as you may drill too large of a hole.

Drill into each welded spot using a high speed pistol drill, but do not apply too much pressure.  You don’t want to push the wrong knockout out with the drill.

Drill a hole through each weld of the knockout size that you want to end up with.  Next hit it with a hammer and it should just pop out.  This method should only be used with the more difficult concentric knockouts.

If no pre-punched factory made concentric knockouts are available, you will need to make your own hole using a hole saw or a knockout punch.  You can find the correct size hole saw or knockout punch on my electrician’s hole saw post.

Here are some power tool accessories from Ideal that are helpful with making knockouts. 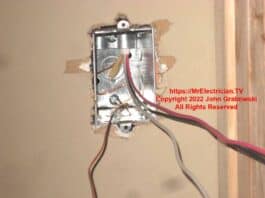 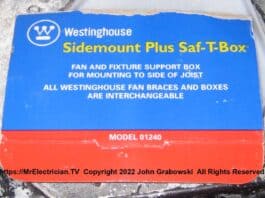 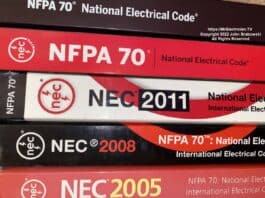 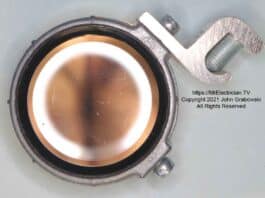 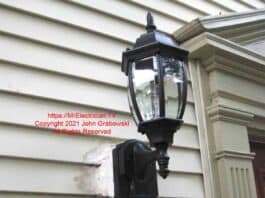 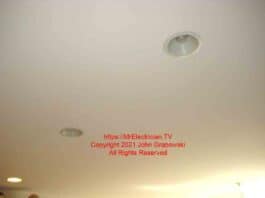 ABOUT US
Pictures, Descriptions, and Handy Tips From Working over 40 Years as an Electrician. All Photos and Text Published on MrElectrician.TV is Copyrighted Material. © 2022, All Rights Reserved. Mr. Electrician is a Registered Trademark. MrElectrician.TV does not use cookies to track your browsing activity, but its advertisers might.
Contact: JohnG@MrElectrician.tv
FOLLOW US
© 2022 John Grabowski All Rights Reserved Mr. Electrician is a Registered Trademark
Cookies are used on this website to give you the most relevant browsing experience by remembering your preferences and repeat visits. By clicking “Yes, I Agree”, you consent to the use of the cookies according to your choices in the Cookie Settings.
.
Your Cookie SettingsYES, I AGREERead More
Cookies