Dear Mr. Electrician: How do I replace an old style ceiling pancake electrical box?  After removing the existing light fixture canopy cover, I found that there isn’t a standard ceiling electrical junction box.  Instead, there is a black round disc (about 3 inches in diameter) which has a 1 inch long screw type rod sticking out of it.  The wires are around it.  This is not compatible with the new light fixture that I want to install.  What do I do?

Answer: I suspect that the round disc is actually an old black enameled metal pancake box.  It’s approximately the diameter and thickness of a hockey puck and made out of metal.  Sometimes an old gas pipe protrudes from the middle of this pancake box instead of a fixture stud.  A setscrew tightens the box to the gas pipe.  NOTE: Text links below go to applicable products on Amazon.com.

That was how old houses that originally had gas lighting converted over to electric lighting.  The pancake box was mounted on to an existing disconnected gas pipe.  The cables were attached to the pancake box and splices were made.  An additional fitting or two was threaded onto the gas pipe to support the light fixture which was made for this type of installation.

The canopy of the old style ceiling light fixture acted as the junction box for the spliced wires.  On very rare occasions I have found that the gas pipes were still connected to the main gas line, so proceed with caution.

The fan bracket above was screwed to the ceiling independently using long sheet metal screws driven into the ceiling wood joist.  The remains of the cut ceiling fan wires protruded down.

Other types of old pancake boxes were mounted directly onto ceiling joists using wood screws.  Instead of an opening for a gas pipe, they would have their own fixture stud for attaching a light fixture to.  The fixture stud had the same size thread as a gas pipe of the same diameter.

Around the pancake box are four holes, each with a setscrew or clamp which engages the cable, preventing it from being pulled out, and provides electrical continuity for the equipment ground for the armored cable.

The wiring is most likely armored cable (BX).  However ungrounded non-metallic cable (The Type Before Romex), or knob and tube type wiring is possible as well.

Beware if the gas pipe has a cap on it. Usually the caps are removed when the gas line is taken out of service.  However, until you can verify that the gas line is dead you should not remove the cap.

In a situation where the original wiring insulation has degraded, the best thing would be to install new wiring.  However that not only could be expensive, but damaging as well.  Walls and ceilings may need to be cut open to re-route or remove old dried and brittle cables and install new wiring.

As you can see above most of the old insulation broke off as I moved the wires.  Note that I identified the conductors with colored electrical tape.  This was a normal wiring set up for a ceiling light controlled by a wall switch.  Here the power entered into the pancake and a two wire cable was run down to the switch.  See my post on smart light switch wiring diagrams for more information.

Turn off the power. You will need to remove the old pancake junction box.  Do it carefully so as to not damage the existing wiring.  Often, wiring from that era of home construction now has dry, brittle insulation on it.  Any disturbance to the wires could cause the insulation to break off.

Make sure that you identify each conductor in the box before you take apart the splices.  The color coding is almost gone on these wires.  The wires are likely to be soldered and taped.  The insulation on the wires will break off as you separate the conductors.  Get a roll of white and a roll of black electrical tape.  You may also need rolls of red and blue electrical tape.

It doesn’t show it above, but I was able to strip about 2″ of steel armor off of each cable using BX cutting pliers.  I held the cable with Channellock pliers and slowly nipped away at the steel armor using the BX cutters.  That gave me enough room to find some good insulation to work back from with new electrical tape.

On some jobs the gas pipe will be a hindrance to installing a new modern round or octagonal ceiling electrical box.  Also it is quite likely that there is a piece of wood supporting the gas pipe or the pipe may be attached to the side of a ceiling joist.

Sometimes a pipe wrench can be put on the gas pipe to unscrew it from the elbow.  An internal pipe wrench might be needed.  Other options are cutting it out with a multi-function oscillating tool or a reciprocating saw, or relocating the ceiling box.  Relocating may not be an option due to the lengths of the existing wires.

If you are planning to install a ceiling fan, then you must install an electrical box rated for ceiling fans.  Ceiling fan boxes are available in pancake depth.

A duplex BX connector was used to attach the cables above to the pancake box.  I had to clean up the opening in the ceiling with my multi-tool due to pieces of wood lath and plaster embedded with the old pancake.

Use the proper cable connectors and anti-short bushings for the cables and bring them into the back of the box.  Trim the sharp edge of the BX cable using BX cutters or diagonal pliers.  Then insert the anti-short bushing inside of the armor to protect the wire from being cut by the metal armor.

Tighten the locknuts by hitting them with a screwdriver driven by a hammer after the box is secured to the ceiling or bracket.  The BX cable metal armor is the grounding conductor, so it needs to be a tight connection.

The box above is ready for a standard light fixture installation.  Number 10 x 1.5″ sheet metal screws were used to secured the pancake box to the ceiling joist.  The box is grounded through the correct use of the cable connector and the BX armor.  A grounding pigtail was added using number 14 wire and a 10/32 green ground screw.  The wire with red is the switch leg (LOAD) which gets connected to the black wire on the light fixture.

The white wire with green (The LINE to the switch) was partially covered in black tape before getting connected to the black hot wire with green (LINE).  When a white wire is used for something other than a neutral, it must be re-identified.  I use colored electrical tape.  Some other electricians use a permanent marker pen to change the wire color.

In the above box you can see that two knockouts have not been punched out.

A visitor to my blog sent me the above photo of a pancake box with live electrical wires still in use.  The house is from 1930.  His dilemma was how to remove the box.  There are no screw holes in the back of the box, but there is a metal bar that passes through (See yellow circle).  I surmised that the metal bar is a support bracket that is either attached directly between two ceiling joists, or screwed to wood lath.  The box is held firmly onto the bracket by the center screw.   If that is the case, then some plaster would need to be removed in order to take out the bracket.

I suggested possibly cutting the bracket with an oscillating multi-tool so that an old work fan box and brace could be installed.  With a house that old it is quite possible that the plaster would be damaged.

The insulation on the wires is in good condition, but I recommended taping each wire with the appropriately colored electrical tape to keep the insulation intact.  White tape on the three neutral conductors.  Black tape on the four hot wires.  Red tape on the switch leg.

The cable in the upper left section of the pancake box is the one that goes down to the wall switch.  The white wire from this cable is connected to the three black hot conductors.  The black wire which brings the power back from the switch is by itself.  These wires should also be re-identified at the switch with red and black electrical tape.

A white wire can be used as a hot conductor, but it must have its color changed to something other than white, gray, or green.  Electrical tape or a permanent ink marker are two common methods for changing the color of wires.  Unfortunately the re-identification of the white wire does not always occur as evidenced in the above picture.

On the center stud of the above pancake box is a brass screw on cap.  I forget how it was used, but I think it had to do with hanging light fixtures.

The National Electrical Code accepts the use of pancake ceiling boxes even though they do not have a lot of cubic inch capacity.  They are permitted because the code allows the cubic inch capacity of the light fixture canopy to be included in the total calculation of box fill.  Generally speaking, for each #14 wire two cubic inches is required.  For #12 wire it is 2.25 cubic inches.  Each internal wire clamp counts as one wire.  Read article 314.16 for all of the details.

My post on repairing a loose ceiling electrical box may be helpful.

Also my post on installing a ceiling fan electrical box is good to read. 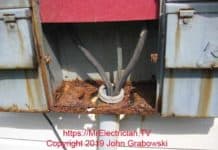 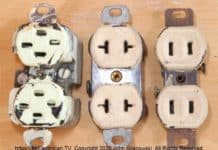 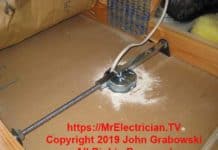 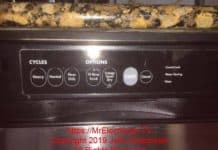 Testing a Dishwasher Appliance for Power