Dear Mr. Electrician: How do I go about testing my dishwasher for power?  Last night I tried to wash dishes, but nothing happened.  There were no sounds or visible indicator lights.

Answer: Testing a dishwasher for power is a good starting point.  However an appliance such as a dishwasher usually requires the services of an appliance technician for repair and not the expertise of an electrician.  NOTE: Some text links below go to applicable products on Amazon.

TESTING A DISHWASHER FOR POWER

If resetting the circuit breaker or replacing the fuse does not get the dishwasher running again, you will need to look inside of the dishwasher.  Start by removing the bottom front cover to expose the components of the dishwasher.  This is usually accomplished by the removal of a few screws on each end or the pushing of some clips to release the panel.

It is also possible that the bottom cover is just hooked in place and only needs to be lifted up for removal.  The dishwasher owner’s manual may have the necessary steps detailed for the cover’s removal.

In the bottom of the dishwasher you should see a small electrical box with a cord or cable going into it.  Use a Non-Contact Voltage Tester and touch the side of the cord or non-metallic cable to see if there is electricity.  The non-contact tester will not work properly with a metal jacketed cable such as Type AC (BX) or Type MC cable.

With the power to the dishwasher turned OFF, remove the cover on the small electrical box located inside on the bottom of the dishwasher, not inside where the dishes get washed, but underneath.  Double check the wires inside the small electrical box with the Non-Contact Voltage Tester.  If it still indicates that there is no voltage present then disconnect the white and black wires.

Using a pigtail socket with an ordinary working light bulb, connect the pigtail socket wire leads to the cable or cord coming into the dishwasher electrical box.  Be sure to cover the ends with wire connectors so that no bare copper wire is exposed.

Now go and turn the power to the dishwasher back on at the fuse box or circuit breaker panel.  If the light bulb lights up, then you have confirmed that the dishwasher is getting power and that the problem is internal and will require the expertise of a qualified appliance technician.  Shut the power off, remove the pigtail socket and reconnect the wires inside of the dishwasher electrical junction box as they were.

If the pigtail socket light bulb does not light up after you have turned the dishwasher circuit back on, you may have an electrical problem which is causing the dishwasher to not work.

To determine why the dishwasher is not getting power you will need to open up the fuse box or circuit breaker panel.  Do not do this unless you are comfortable working around exposed live electrical parts and have the proper tools, safety equipment, and knowledge to do so.

Leave the pigtail socket connected to the cord or cable supplying power to the dishwasher. Remove the front cover to the fuse box or circuit breaker panel.  Using a voltage tester with wire leads or another pigtail socket with a light bulb, check to make sure that there is electricity coming off of each circuit breaker or fuse.

Hold one lead of the tester on the neutral bar where all of the white wires are connected and use the other lead to touch each screw terminal on the circuit breakers or fuse sockets.

Also tighten all of the connections on the neutral bar and ground bar.  A loose connection could affect the performance of your dishwasher.

If there is still no power at the dishwasher even though all of the fuses or circuit breakers have power, then there may be an electrical problem somewhere in the circuit wiring.  There could be a loose connection in a remote junction box or in a receptacle wall box somewhere.  A wire may have been cut due to some recent renovation activity.

Some shoddy wiring installed in the walls years ago may have finally failed.  These are more difficult to find and correct because it entails opening up receptacles, switches, junction boxes, and sometimes walls to track down the problem.

I would start at the dishwasher and find where the wire that supplies power to it goes.  It could come from a kitchen electrical receptacle outlet.  You would have to open up each outlet to find out which one is feeding the dishwasher.

I got a call from a regular client telling me that she was getting a new dishwasher and needed me to come over to disconnect the power to the old one and connect it to the new model.

First thing that I did was open the tow kick panel and then the little junction box where the electrical connections were made.  I used my non-contact voltage tester and confirmed that the power was still on.  I flipped off a couple of circuit breakers to identify the dishwasher circuit and then disconnected the wire from the old dishwasher.

I then pulled that wire through into the adjacent cabinet so I could use it to power a new GFCI electrical outlet.  I put the new outlet box together and mounted it inside the cabinet, then turned on the circuit breaker.

Using my non-contact tester again on the cable going into the box, I was able to confirm that power was back on.  However the next thing that I did was plug in my outlet tester to check polarity and to test the GFCI.  As soon as I plugged my outlet tester into the GFCI outlet the circuit went dead.

It turns out that in this instance the circuit breaker was bad and only worked intermittently.  The client assumed that the dishwasher was bad and ordered a new one.

The outlet inside the cabinet above was installed for a replacement dishwasher in an existing kitchen.  The wire that was originally connected directly to the old dishwasher was rerouted into the adjacent cabinet.

A four inch square box was installed on the wire and the bare ground wire was screwed to the box with a pigtail wire hanging loose to attach to the GFCI.  The connections were made on the receptacle before the box was mounted to the side of the cabinet

Here is a post about installing an electrical outlet for a microwave oven. 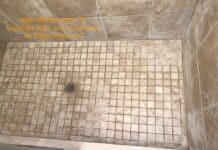