Wiring Recessed Lighting in a Condominium

Dear Mr. Electrician: How do I wire recessed kitchen lighting?  How difficult is it to install recessed lighting in a condominium and will it make a difference in appearance?

Answer: Wiring kitchen lighting will vary depending on the structure of the building or house.  Yes the appearance of recessed lighting will be different than a fluorescent light fixture.  Recessed lights point the light down, so the ceiling tends to be a little dark.  However having multiple lights instead of just one will illuminate the lower areas that were dark before.  You should do some homework before choosing what type of recessed light to install.  My wiring example is of a condominium kitchen located on the first floor with a bedroom above.  NOTE: Text links below go to applicable products on Amazon.com

Generally speaking a recessed light has three components: a housing or frame, a trim, and a light bulb.  There are several diameters of housings and in addition many types and colors of trims.  Each will have a different kind of light output.  Smaller recessed lights tend to have less beam spread (Meaning the light is narrow) and are limited in light bulb choices.  Consequently if you want a lot of illumination you will need more recessed lights.

My most common recessed light installation is the Halo H7 6″ diameter with a BR40 light bulb.  The BR40 bulb has a wide beam spread and the 6″ diameter housing has the most choices of light bulbs and trims that can be used with it.  Most of the time the customer just chose the white coilex trim as it blended with the white ceiling.  Other recessed light manufacturers also have 6″ housings and a large assortment of trims as well.

The most challenging aspect of wiring retrofitted recessed kitchen lights is the measuring and laying out of the location for each light.  With a finished ceiling there is no simple way of knowing what obstacles might be in the way of your light installation.  Therefore you must probe the ceiling ahead of time to see if there are any utilities or building structure where a light was planned.  Something to be mindful of is the fire rating of the ceiling if there is another condominium above yours.  Remodeling type recessed lights are usually not fire rated.

An alternative would be to install surface mounted LED disks on the ceiling which have a similar appearance to recessed, but mount directly onto a standard round or octagonal electrical box.  There are also available spring loaded disk lights that attach directly to the drywall ceiling.  They have their own attached junction box.  Below are some photos of a recessed lighting installation in a condominium kitchen.

A hole was cut in the middle of the ceiling to facilitate the installation of the wires.  The center round electrical box was the original feed for the old fluorescent ceiling light fixture.  A temporary pigtail light socket is connected for work lighting.

First thing is to apply for an electrical permit at your local building department.  In the job below I submitted a specification cut sheet (Usually available from the manufacturer’s website) for the type of light I was installing along with a hand drawn diagram of the light placement on the ceiling in relation to the cabinets and appliances.

I also included a short “Scope of Work” that I typed up briefly detailing the work and wiring methods that I will be using.  It is best to give the building department as much information as possible ahead of time in an abbreviated manner, so they have a full understanding of what you intend to do.  This way if there is a problem with your wiring methods, you will find out in advance.  The alternative is the inspector will look at your finished work and fail the inspection if something is not right.

My first action for wiring kitchen recessed lights is to make a tiny pencil mark on the ceiling where the customer said that they would like the recessed lights to be installed by taking some measurements from each wall.  I mark all of the lights.  I then look for signs of ceiling joists by searching for nail pops or spackled holes.  A bright flashlight held close to the ceiling is helpful for this.

Next I make a small hole in the center of the recessed light location and poke a long thin screwdriver or a short piece of fish tape through the ceiling.  I rotate the screwdriver or fish tape in different directions to probe for obstacles.  If it appears clear of obstacles with the screwdriver I use a homemade tool that I fabricated from a coat hanger.  It is an L shaped coat hanger wire with the lower part the size of the radius of the recessed light to be installed.  I push the L shaped wire up into the hole and spin it around while moving it up and down.  I also pull it down close to the ceiling to check for resilient channel which is used for the reduction of sound transmission.

Once I have all of the recessed light locations marked and probed and am confident that there are no obstacles, I cut the holes for the old work recessed housings.  The manufacturer furnishes a template for cutting with each light.  I use my awl to center the template on my probe hole and draw a pencil line around the template.  I then cut the hole by hand using a compass saw or a keyhole saw.

There are hole saws available to cut these size holes however I prefer to do it by hand just in case there is something that I missed with my probing such as a telephone wire.  I can usually feel through the saw if I hit anything.

To reduce dust landing on the floor I use the bottom of a plastic juice bottle in which I have cut a slot for the saw to go through (See photos below).  The juice bottle bottom catches a good portion of the dust while the remains float down to a drop cloth on the floor.  Sometimes I put a box on top of the ladder to catch dust, but I must be careful not to knock it over.

I once saw a picture of another electrician who would take a box and use some cord to tie it to his waist and hang from his neck to catch the dust as he cut holes.  Catching the dust keeps it from spreading around and makes clean-up a little easier.

The small hole in the center of the cut ceiling opening is where I inserted my long thin screwdriver and my L shaped coat hanger wire to probe for obstacles before I cut the hole.

By probing with a long thin screwdriver and a short piece of fish tape it was possible to locate the obstacles through a small hole.

After all of the holes for the recessed lights have been cut I figure out where I will have to drill inside of the ceiling to install the wires.  Some homes have truss construction which are very easy to fish wires through without having to drill through ceiling joists.  Solid wood joists will need to be drilled through.  A hole is needed in the ceiling on each side of the joist so that a drill can fit in the ceiling and the wire pushed through.

I cut the ceiling holes at a 45 degree angle with the blade pointed inward towards the center of the hole.  This makes it much easier to patch later when done.  I use an angle drill with a 9/16″ self pulling auger drill bit for drilling through a ceiling joist as I don’t have to insert the entire drill through the hole and it has a lot of torque.

A home with a basement or attic may be easier to install new cables as it is possible to drill up or drill down into a wall as long as you have the correct location identified.

The square hole in the center of the ceiling was cut with the compass saw held at a 45 degree angle.  This makes it much easier to patch the hole with the same piece of drywall that was removed and some joint compound.  All of the edges are buttered with joint compound and are smoothed in place without taping.

Connect the recessed lights to the cables hanging from the ceiling.  The junction boxes attached to remodel type recessed light housings tend to be small so I leave only about six inches of wire from each cable inside of the box.  Once the wires are spliced tightly and covered you can install the recessed lights.

Installation of remodel type recessed lights varies between manufacturer and sometimes between sizes in one brand.  Usually there are some sort of clips or springs that go against the finished ceiling to hold the can tightly in place.  Check the manufacturer’s instructions.  I have found that inexpensive off brands found in home improvement stores are more difficult to install than the well known brands available at my local electrical supply company.  The off brands were furnished by customers who bought them ahead of time before I was hired.

Once the remodel housings are installed the finish trim can be attached.  This will vary by trim and by manufacturer, but it is usually just a couple of springs that hold it in place.  After that the light bulbs can be installed.  It is very important to use the correct light bulb for your housing and trim.

After 24 hours the patch above can have another coat of joint compound applied.  After that dries and is sanded, the ceiling can be painted.  On this particular installation it was possible to eliminate the existing round ceiling electrical box because it had only one cable in it which was re-routed to one of the recessed lights.

Once the electrical work is finished, the holes in the drywall will need to be patched.  I always do a rough patch by using the old drywall pieces that I cut out.  The ceiling will still need another coat of joint compound the next day and sanding and painting after that, but I only specify a rough patch in my proposals.

Although I had done work in the condominium above before and knew that the ceiling contained trusses for support, it still turned out to be a challenge as I found a pair of water pipes installed directly above where the customer originally wanted a recessed light.  As a result I had to remeasure for all of the lights so that they were evenly spaced.  There was also an air duct near the center of the ceiling which is why I had to cut a hole in the middle so I could get the cable around it.

I also installed a microwave oven over the stove in this kitchen. 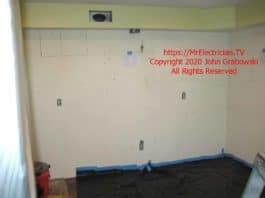 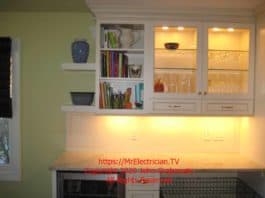 Add Light Switch to One Existing