Dear Mr. Electrician: How can I install a GE Interlock Kit on a GE main breaker panel so that I can connect a portable generator to it safely?

Answer: In order to install a GE interlock kit on a main breaker, You first must determine if you have the needed circuit breaker spaces for a generator circuit breaker and interlock kit in your main electrical panel.   NOTE: Some text links below go to applicable products on Amazon.  As an Amazon Associate I earn from qualifying purchases.

CHOOSING AN INTERLOCK KIT FOR THE MAIN BREAKER

Some existing circuit breakers near the main will need to be moved to make room for the generator breaker.  Then you need to order the correct generator interlock kit that is approved for your circuit breaker panel.

On newer electrical panels many manufacturers make an accessory interlock kit.  If you read the labeling inside of the panel carefully you should see a part number for the interlock kit for your panel.  You may need a magnifying glass to read the label.

Wording such as “Electrical work consists of the installation of a third party manufactured interlock kit on an existing 150 amp, 30 circuit GE main electrical panel.  A new 50 amp sub-panel is to be installed for relocated circuits.  Generator inlet to be installed outside next to garage door” is something that I probably used with the permit application for the installation depicted in this post.

I had a permit application for an interlock kit installation rejected once.  After I submitted the paperwork, I received a call from the electrical sub-code official.  He said that the state was no longer accepting the laboratory testing results of the third party interlock kit.  Consequently I was not allowed to install that particular interlock kit as it would never pass inspection.

I contacted the manufacturer and it was confirmed that my state was the only one that was no longer accepting the laboratory testing results from this one particular testing laboratory.  The testing laboratory had stopped doing electrical testing, but their previous tests were good.

My state would no longer accept even the previously accepted testing.  The manufacturer said that they were in the process of paying to have all of their products retested by another testing laboratory that my state would accept.

The interlock kit installation below was installed before the state denied the use of this brand until they were re-tested.

When I first saw this client’s main electrical panel I noticed immediately that it was overloaded with circuits.  The panel was only rated for 30 circuits, but due to the use of twin circuit breakers it contained more than 30 circuits.  The homeowner wanted an interlock kit installed so that he could use his portable generator to power certain circuits in his house in the event of a utility company power failure.

The red arrow above indicates on the label for this GE circuit breaker panel that it is approved for a maximum capacity of 30 circuits. It reads “30 Poles Maximum”.  In order to comply with the “National Electrical Code”, some of the existing circuits needed to be removed from this panel as it already had more than 30.

By removing circuits, room is made for the three spaces needed for the interlock kit and also brings the circuit breaker panel back into code compliance in order to pass inspection.

I had to locate the new electrical sub-panel several feet away from the main panel due to a lack of space next to the main panel.  It actually worked out well using EMT conduit to feed the sub-panel and to relocate the existing circuits.  You can see my post on electrical conduit types here.

I had plenty of wall space and ceiling space to relocate some of the existing circuits and to mount the new sub-panel.

Most people want the refrigerator, furnace, and well pump connected to the generator.  Other circuits such as bathroom lighting, water heater, microwave oven, stove, and sump pump are also good choices for generator power during a blackout.

Above is the new sub-panel installed using 3/4″ EMT conduit.  A 3/4″ EMT bender was used to bend the conduit to fit into place.  Pre-bent conduit elbows and offset fittings are available for some sizes of electrical conduit.

Note the 4 11/16″ square junction boxes mounted on the ceiling.  By mounting the junction boxes there, it made it very easy to remove cables out of the existing GE main circuit breaker panel and bring those circuits into the new GE sub-panel.

In this particular installation some of the original circuit wiring was fastened to the drywall ceiling.  I was able to mount two junction boxes on the ceiling and redirect a few of the existing circuits into the junction boxes.  From the junction boxes I pulled single conductors through the EMT conduit down to the sub-panel.

In the 3/4″ EMT conduit for the sub-panel feed from the main panel, I pulled two #6 THWN conductors for the hot line wires.  I also pulled in one #8 conductor for the neutral and a #8 grounding conductor.  A two pole 50 amp circuit breaker was installed in the main panel for this.

Tools required for this job included a 3/4″ EMT conduit bender, a rotary hammer to drill a hole through the masonry wall to bring the the 10/3 Romex into the back of the generator inlet.  An electrician’s hammer, pliers, screwdrivers, awl, razor knife, half round file, and Channellock pliers were all used here.

Materials for this job included 3/4″ EMT conduit with set screw connectors, set screw couplings, and straps.  Also used was #12 single conductor wire in white, black, and green.  10/3 Romex with ground was used to connect to the generator inlet.  Romex staples and BX staples were both used.  #6 copper and #8 copper THWN wire was used to feed the sub-panel.

A GE sub-panel with no main (Lugs only) was used with 1/2″ and 1″ GE circuit breakers.  4 11/16″ square x 2 1/8″ deep metal junction boxes were used with Romex connectors and 4 11/16″ square blank covers.  One Reliance PB30 outdoor generator inlet box was used to connect to the portable generator.  Emery cloth was used to clean paint from around the drilled holes in the panel cover for better grounding of the interlock kit.

The photo above depicts a completed interlock kit installation with many of the circuits labeled.  The red arrows point to labels that were provided by the interlock kit manufacturer and must be installed as per the instructions supplied with the interlock kit.

The yellow tape marks are there to help the homeowner choose some of the important circuits to be powered by the generator.  When the utility company power goes out, this basement will be dark until the portable generator is powered up.

Article 445 in the National Electrical Code covers generators.  You should also read article 702 entitled “Optional Standby Systems”.  Article 250 is also applicable as are others that may be contingent on the type of wiring methods used.

Locate the generator inlet where it is convenient to roll the generator to and is not near any windows.  You don’t want carbon monoxide getting into the house. 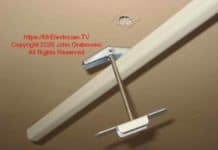 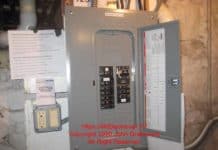 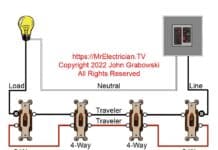